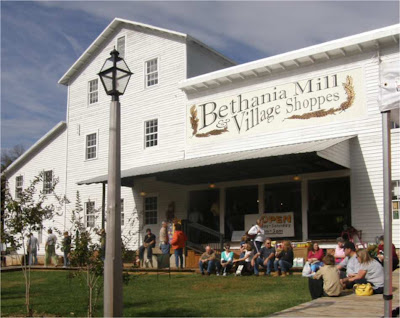 Founded on June 12, 1759 by the Moravian Brethren of Wachovia, Bethania is the oldest municipality in Forsyth County. The first planned Moravian settlement in North Carolina, Bethania is one of the few examples in the United States of a German “medieval” plan farming village. The town was laid out in this German agricultural pattern by the surveyor Christian Gottlieb Reuter. The Moravian Church owned the land. The families that lived in the farming village were each assigned equal bottom-land strip fields and upland orchard lots. Families lived on the 24 town lots that flanked a main street running north and south of a central square. The 500-acre Bethania National Historic Landmark District is the largest National Landmark in Forsyth County. Bethania and its 18th and 19th century properties are listed on the National and North Carolina State Historic Registers of Places.Bethania was re-incorporated in 1995. Today, the original village design remains visible and intact, and most town lots and roadways have remained in continuous use since 1759. Many of the historic Moravian-influenced buildings of Bethania still exist.

What principles of the 2001 Legacy Plan have been incorporated in Bethania?


What Challenges Face the Community?
at 8:00 AM
Email ThisBlogThis!Share to TwitterShare to FacebookShare to Pinterest
Labels: Chapter 11, Neighborhoods and Small Towns