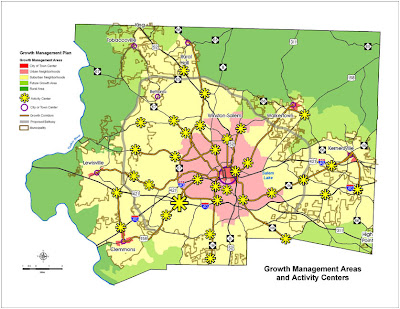 The Growth Management Plan of the Legacy Update uses the concept of Activity Centers and Growth Corridors to concentrate more intense, mixed-use development in designated areas and increased density along select corridors. By concentrating these uses in designated areas, a number of goals can be achieved: increasing residential density levels where infrastructure already exist, thereby reducing suburban sprawl; providing services and shopping convenient to neighborhoods without encroaching into the interior of neighborhoods; creating residential density that can support transit corridors; and providing a housing option for those citizens who don’t have vehicles- including the elderly- or who don’t choose to have vehicles. Creating true mixed-use Activity Centers can help absorb a lot of the new population Forsyth County will be experiencing.

Activity Centers are mixed-use areas developed in a more urban, compact, pedestrian-friendly manner. Most Activity Centers shown on the Legacy Update Growth Management Plan already exist as areas of activity that include commercial development. Some Activity Centers, such as the urban East Winston and West Salem Activity Centers, as well as the suburban Walkertown/US 158 Activity Center, are already mixed-use developments, but need to be retrofitted in terms of walkability, design, or connectivity. Retrofitting and redevelopment will be necessary to accommodate an urban form and to establish connections to surrounding neighborhoods. 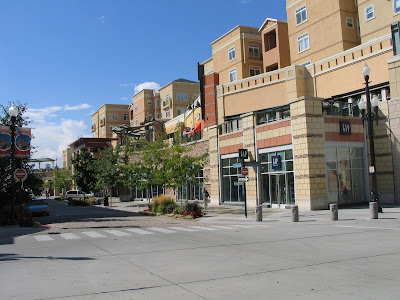 Special attention needs to be given to producing an acceptable mix of land uses, designing parking areas for walkability, providing circulation patterns for vehicular, pedestrian and bicycle access, and providing public amenities including plazas and open space. Energy-efficient, sustainable development should be highly encouraged in Activity Centers.

One good local example of redevelopment of an older shopping areas to a more urban form is Thruway Shopping Center. New shops were added along Stratford Road in what was the parking lot. The new construction created a “courtyard effect” internally, and the new buildings give a more pleasing view from Stratford Road than the previous surface parking lot.

The older automobile-oriented strip commercial areas found along main corridors such as Peters Creek Parkway, University Parkway, Liberty Street or Stratford Road have experienced decline as retail uses relocated to newer centers further out. However, these declining strips present an opportunity for increased residential density and mixed-use development. This increased density along Primary Corridors is critical in establishing a well-used public transit system and accommodating more residents, including seniors and those citizens needing affordable housing. Primary Corridors are intended to function as the main future multi-modal transportation arterials in Forsyth County, and most Activity Centers are located along these corridors.

Secondary Corridors will be identified in the Area Plan process. Select locations along these corridors could have higher-density housing and may become transit corridors.
at 7:00 AM
Email ThisBlogThis!Share to TwitterShare to FacebookShare to Pinterest
Labels: Chapter 11, Neighborhoods and Small Towns