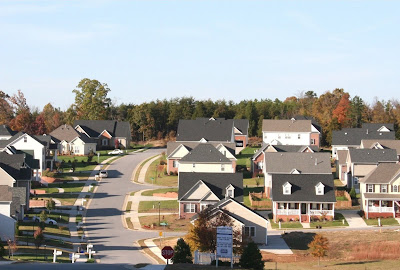 Suburban Neighborhoods have developed in Forsyth County primarily since WWII. These areas are predominantly large-lot, single-family developments, though PRDs (Planned Residential Developments with cluster housing) and multifamily can be found scattered throughout the Suburban Neighborhoods. Services tend to be centralized in planned shopping centers or strip development instead of the smaller commercial nodes found in older neighborhoods. Many homes are a good distance from shopping opportunities and services. Industrial uses tend to be grouped in planned business parks. While some suburban areas have transit service, most trips are made in an automobile.

In general, Suburban Neighborhoods have high rates of homeownership, are generally in good condition and well maintained. Local streets are often curvilinear, contain culs-de-sac, and may not connect to other adjacent subdivisions. Sidewalks are present along some roads, but most lack sidewalks, forcing people to walk on the street or adjacent to the street. Many subdivisions have the same building design as other subdivisions, and therefore do not have their own identity.

People tend to associate low-density suburban development with desirable community characteristics such as good schools, low crime and moderate taxes. Unfortunately, the type of development found in the Suburban Neighborhoods is often an inefficient use of our limited land resources. Sprawling development requires more infrastructure, is more expensive to provide services to, and causes increases in traffic congestion and pollution. In some Suburban Neighborhoods, the housing stock is already in decline. In larger cities, suburban decline has been emerging as a greater issue.

Interestingly, Forsyth County has a number of Suburban Neighborhoods that are reaching the threshold to be considered “historic” at 50 years old. These areas have already been identified in a historic inventory, but are not yet prioritized.
at 5:00 AM
Email ThisBlogThis!Share to TwitterShare to FacebookShare to Pinterest
Labels: Chapter 11, Neighborhoods and Small Towns