How have the 2001 Legacy Plan strategies worked for neighborhoods and small towns? 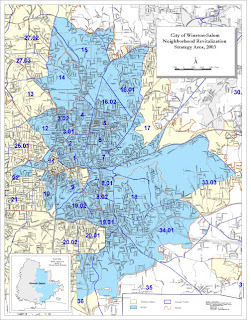 The success of neighborhood improvement strategies since the adoption of Legacy is mixed. As noted above, suburban sprawl is still a major part of new development. However, major planning efforts and ordinance amendments have been completed to create the necessary tools to design new neighborhoods and revitalize existing neighborhoods. Infill ordinances have been adopted for both commercial and residential infill in the Urban Neighborhoods, GMA 2. New Street Standards include a sidewalk requirement for subdivisions within the Serviceable Area of the City and County. New Planned Residential Development (PRD) Standards, a Tree Ordinance for the City and a Demolition by Neglect Ordinance (for protection of declining historical residential structures) were adopted. The Neighborhood Conservation Overlay (NCO) ordinance was rewritten to make it more usable and enforceable, and a Manual for certifying NCOs was created. Two neighborhoods, Country Club Estates and Mallard Lakes, adopted conservation standards for the preservation of their existing neighborhood character.

For the first time, Area Plans have been completed for the entire county except the rural areas. Two distressed public housing projects, Kimberly Park Terrace and Happy Hill Gardens, have been converted into mixed-income and pedestrian-friendly neighborhoods through the US Department of Housing HOPE VI Program. In addition, the Housing Authority of Winston-Salem is channeling efforts to create vibrant mixed-use and mixed-income neighborhoods in the area covered by the Cleveland Avenue Initiative Master Plan.

A number of National Register Districts have been created since the adoption of Legacy to protect the county’s cultural, historical and architectural resources including Ardmore, Centerville, Holly Avenue, Reynoldstown, Sunnyside/Central Terrace, Waughtown/Bellview and West Salem.

Various programs providing financial assistance to businesses and individuals are offered by the City of Winston-Salem in the designated Neighborhood Revitalization Strategy Area. One of the most recent programs is the Revitalizing Urban Commercial Areas (RUCA) Program. Phase I of the RUCA Program funded improvements to three areas including Waughtown Street/Thomasville Road, Liberty Street and Washington Park/Acadia Street. Phase II of the RUCA Program has allocated funds for the revitalization of additional commercial areas.

The City of Winston-Salem has also created the Office of Community Assistance with six neighborhood specialists to make it easier for citizens to interact with City government. Several City departments have been combined in an effort to centralize programs that provide neighborhood assistance. Community Development Corporations (CDCs) have been created by community leaders to promote and support community development, and both the Neighborhood Alliance and Neighbors for Better Neighborhoods remain strong and active organizations.

Revitalization efforts have also been accomplished in a number of Urban Neighborhoods through redevelopment, residential and commercial infill, and targeted rehabilitation of residential areas/structures. Some older neighborhoods have been retrofitted with sidewalks and bike lanes along major urban corridors.

While much of the new development has continued the pattern of large-lot subdivisions, some new developments have been designed as pedestrian-oriented neighborhoods with a mixture of residential and commercial buildings including Hillcrest, Northern Quarters, Brookberry Farm, Harper Hill Commons, Shoppes at Little Creek, Vernon Farms and Robinhood Village. However, many of these large developments have not yet been completely built and the tendency has been to do either the residential or the commercial components first. These developments do not yet function as originally intended until completion of all of the approved land uses.

Small towns including Kernersville, Lewisville, Clemmons, Walkertown, Tobaccoville and Rural Hall have developed/updated Comprehensive Plans to guide future development in their communities. These are discussed in more detail in later in this chapter.
at 7:30 AM
Email ThisBlogThis!Share to TwitterShare to FacebookShare to Pinterest
Labels: Chapter 11, Neighborhoods and Small Towns