Existing Planning in Downtown and the Center City 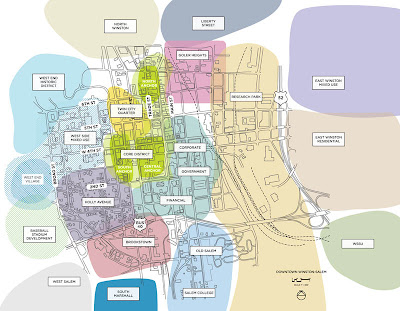 Downtown and Center City planning is undertaken primarily by two organizations: The City-County Planning Board (CCPB) and the Downtown Winston-Salem Partnership (DWSP). The CCPB is responsible for making recommendations on all planning policies in Forsyth County, including Downtown and the Center City. The DWSP, according to the Downtown Plan, is responsible for defining, securing and organizing the community, financial and human resources necessary to effectively create and promote a dynamic revitalization plan for Downtown that will benefit the entire community.

The Downtown Plan, adopted in 2002 with updates in 2005 and 2007, provides the blueprint for future development in Downtown and the Center City. This plan was developed jointly by the Planning Board and the Downtown Winston-Salem Partnership with input from citizens and various community stakeholders. The primary objective of the Plan is to grow the Fourth Street and Trade/Liberty Street corridors into a vibrant, pedestrian-friendly, urban environment that connects to other Downtown districts and offers something for everyone. The Plan also offers development guidance for the rest of Downtown. The Plan recognizes that the success of Downtown is not only based on new development, but on preserving historic resources and encouraging mobility into and around Downtown. The Planning Board and DWSP is currently in the process of updating the Downtown Plan.

The City-County Planning Board also does a series of Area Plans for Forsyth County. Area Plans include parcel-specific development recommendations, including for land in the Center City area beyond the boundaries of the Downtown Plan. These plans were developed after the adoption of 2001 Legacy Plan by CCPB staff, citizens and local stakeholders.

In addition to the CCPB and the DWSP several other organizations are involved with development, design and/or land planning for parts of the Center City:
at 7:30 AM
Email ThisBlogThis!Share to TwitterShare to FacebookShare to Pinterest
Labels: Chapter 10, Downtown and the Center City